When checking out, please put "signed" in the comment field of your order.

You Got Anything Stronger?: Stories (Hardcover)

"An intimate look at the making of a man, an actor, an advocate—and most importantly—a happy human being. A wonderful book that is funny, honest, fearless, and generous in its vulnerability." —Douglas Stuart, Booker Prize-winning author of Shuggie Bain

As a Woman: What I Learned about Power, Sex, and the Patriarchy after I Transitioned (Hardcover)

Martita, I Remember You/Martita, te recuerdo: A Story in English and Spanish (Paperback)

The celebrated bestselling author of The House on Mango Street “is back with her first work of fiction in almost a decade, a story of memory and friendship [and] the experiences young women endure as immigrants worldwide” (AP). In this masterfully written dual-language edition, a long-forgotten letter sets off a charged encounter with the past.

Fox and I: An Uncommon Friendship (Hardcover)

"The book everyone will be talking about ... full of tenderness and understanding." - The New York Times

Those We Throw Away Are Diamonds: A Refugee's Search for Home (Hardcover)

A stunning and heartbreaking lens on the global refugee crisis, from a man who faced the very worst of humanity and survived to advocate for displaced people around the world

Winner of the Restless Books Prize for New Immigrant Writing, Rajiv Mohabir's Antiman is an impassioned, genre-blending memoir that navigates the fraught constellations of race, sexuality, and cultural heritage that have shaped his experiences as an Indo-Guyanese queer poet and immigrant to the United States.

For readers of Helen Macdonald and Elizabeth Alexander, an intimate and haunting portrait of grief and the search for meaning from a singular new talent as told through the prism of three generations of

Into the Forest: A Holocaust Story of Survival, Triumph, and Love (Hardcover)

One family’s inspiring true story of love, escape, and survival

"An uplifting tale, suffused with a karmic righteousness that is, at times, exhilarating." —Wall Street Journal

"A gripping narrative that reads like a page turning thriller novel." —NPR

Hunger: A Memoir of (My) Body (Signed Copy)

A Sense of Belonging: From Castro's Cuba to the U.S. Senate, One Man's Pursuit of the American Dream (Signed Copy)

The Joke's Over: Bruised Memories: Gonzo, Hunter S. Thompson, and Me (Signed Copy)

Illustrator Ralph Steadman's spoke at Books & Books on November 10th, 2006. The day before, Steadman brought quills and several pots of ink and - between visits to the irish pub across the street (RIP John Martin's) for some whiskey - he spent the day signing thousands of books for us. Of those thousand signatures, 20 copies were exceptional.

Of those 20 exceptional copies, booksellers bought half of them (hey, we need some perks!).

We wrapped and stored the 10 exceptional copies which remained and put them in storage. What makes these signatures exceptional? It wasn't the doodle (he did fifty or so caricatures of Kurt Vonnegut) or the date (he dated more than half of them). It could be the larger size or additional detail he gave to a particular image which made it stand out. It could also be that while signing 3,500 books from 7 different publishers, he only created these images once.

Such is the case with this one, which features his signature and date, as well as a character created from the date. IE, 2006 is written twice; once across the end of his signature, then again to create a face. Not only that, the face is smiling. His creatures tended to gawp, growl, and frown. The smiles were few and far between. 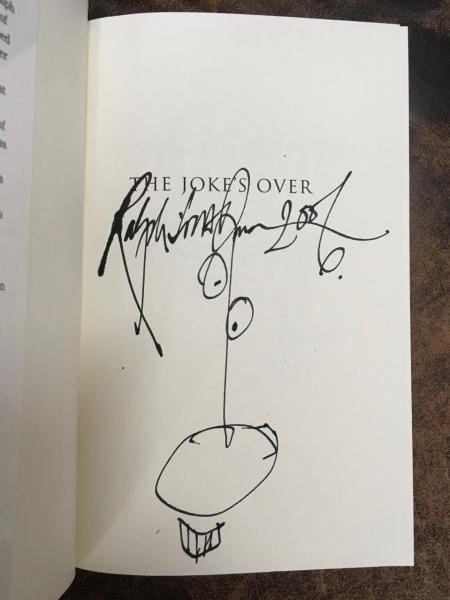 The Audacity of Hope: Thoughts on Reclaiming the American Dream (Signed Copy)

Autographed by President Barack Obama at Miami Book Fair November 2006, when he was a senator.

No COA but Books & Books co-founded Miami Book Fair and we provide books for the events.

Opened for signature and put into storage. 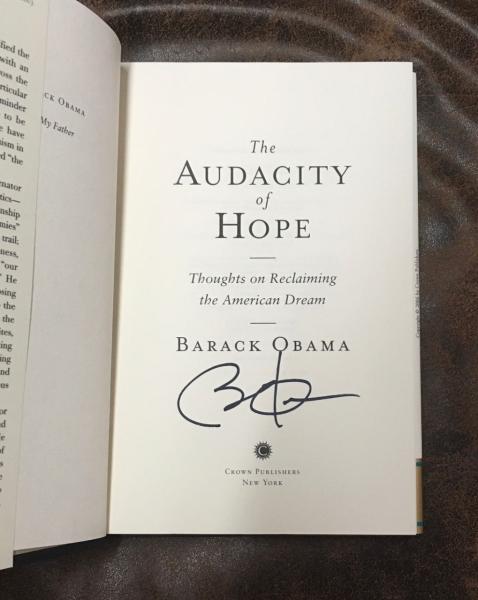